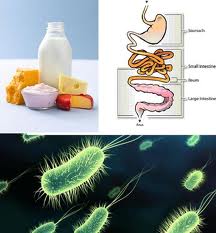 Probiotics are the healthy bacteria necessary for gut health, balancing intestinal flora and stimulating protective functions of the digestive system. They are essential for a healthy gut, particularly when an antibiotic, that strips the digestive system of its natural bacteria is being used.

Probiotics also are used to combat Constipation, to calm Irritable Bowel Syndrome (IBS) and to cure a condition called Bacterial Vaginosis. They have been proposed for Ulcerative Colitis and Crohn’s disease.

There are foods that are naturally rich sources of good bacteria. Most parts of the world have some traditional form of fermented or cultured food that’s been known for centuries to be helpful for digestion and health in general.

All of these foods contain bacteria such as lactobacillus strains. They can be used as a regular part of your diet to help keep a healthy balance of flora in your gut.

You can make your own or buy them in stores but beware of modern versions that may be pasteurised. Pasteurisation kills all the bacteria, destroying any health benefit.

Consume regularly, ideally daily to help the good bacteria thrive; one to two portions a day should be enough.

There are many brands of probiotic available in the market. They can be in capsules, tablets, drinks or powder form.

What does sitting do to your body? Humans, in general are not made for sitting…

We have been incredibly lucky to serve and cure many coronavirus patients during this pandemic….

This current phase of lockdown has been increasing challenging for our physical and mental health….

You have fought through covid-19/coronavirus and have come back triumphant. Finally your stress is over….

A skin disease is usually not life threatening, but can cause excessive irritation, anger and…

Mental health remains a repressed topic all around the world, inspite of it being one…

Homeopathy and Coronavirus treatment is one of the major debates in the healthcare industry. The…

India leads in terms of diabetes all over the country. Every family has a diabetic….