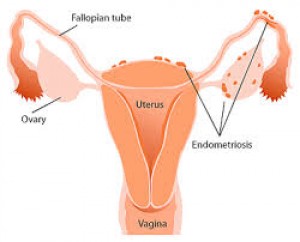 Endometriosis is a disease affecting many millions of women and teen s worldwide and a leading cause of female health problems. It is a women’s medical condition that occurs when the lining of the uterus, called the endometrium, grows in other places, such as the fallopian tubes, ovaries or along the pelvis. When that lining breaks down, like the regular lining in the uterus that produces the menstruation, it has nowhere to go. This causes cysts, heavy periods, severe cramps and even infertility.

Symptoms of endometriosis include:

Doctors don’t know the exact cause of endometriosis. A combination of genetic, biologic, and environmental factors may work together to trigger the initial process, produce implantation, and cause subsequent reseeding and spreading of the implants.

Theories of the cause of endometriosis include:

For endometriosis treatment, a homoeopath has to take into consideration individualistic physical and mental complaints of every patient and accordingly medicines are prescribed.