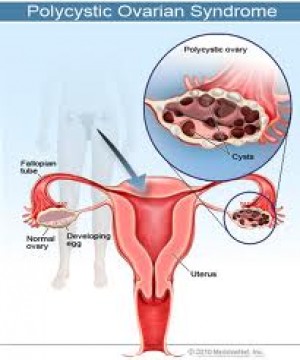 Polycystic Ovarian Syndrome (PCOS) is a condition in which many cysts develop from ovarian follicles that fail to rupture and release eggs. PCOS is one of the major causes of infertility.Women who have PCOS are at a greater risk of developing ovarian cancer and diabetes.

In PCOS, there are many small cysts around the edge of the ovaries.

It occurs frequently in women who are obese.

It is the result of abnormally high production of the hormone androgen by the ovaries and the adrenal glands.

PCOS usually does not cause symptoms before mid-puberty, when the ovaries begin to produce hormones in significant amounts. Women then can have some or all of the following symptoms:

How is PCOS diagnosed?

If your doctor suspects that you have PCOS, he/she will perform blood tests and an ultrasound. The blood test will check the level of androgens in the blood. If PCOS is present, the ultrasound will show multiple small cysts around the edge of the ovary.

Since the cause of PCOS is poorly understood, it not possible to prevent PCOS. However, maintenance of a healthy weight and lifestyle  are important in preventing and controlling many of the conditions that may be associated with PCOS.

Homoeopathy can do wonders…..

PCOS responds only to constitutional treatment.

Some common remedies prescribed for PCOS are:

Infertility is inability to conceive. Stating the obvious? Yes. But, do you know…

Health Benefits of Tofu Tofu, made from soybean curds, is naturally gluten-free and low calorie,…