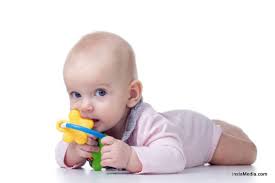 Teething (Dentition) begins before a child’s first tooth breaks through the gums. It is a natural process but causes sore gums. Teething lasts from six months to three years. Your baby is teething when his or her first set of teeth, called primary teeth, break through the gums.

What are the symptoms?

Many babies do not experience any problems or pain. When symptoms do occur, they generally last for several days before and a few days after the tooth comes through the gums.

Some babies are fussier than usual when they are teething. This may be because of soreness and swelling in the gums before a tooth comes through. These symptoms usually begin about 3 to 5 days before the tooth shows, and they disappear as soon as the tooth breaks the skin. Many babies don’t seem to be affected by teething.

If the baby is feverish and acts sick or very upset, seek medical care. Something else may be causing the symptoms.

Teething babies usually like to chew on a wet washcloth or teething ring.  Make sure anything given to your baby is clean and too big to swallow.

Homoeopathy has very good medicine for babies during dentition period.

The most common complaint parents come with is loose motions (due to swelled and irritable gums and babies putting anything  and everything in  mouth) and irritation.

Some of the remedies which can be safely used here according to some symptoms are: